I have had a Fujifilm X-T1 for a little bit over a year now. I am a huge fan of what Fujifilm are doing with the camera controls and sensors. I’ve been able to capture some images that I really love with the camera. 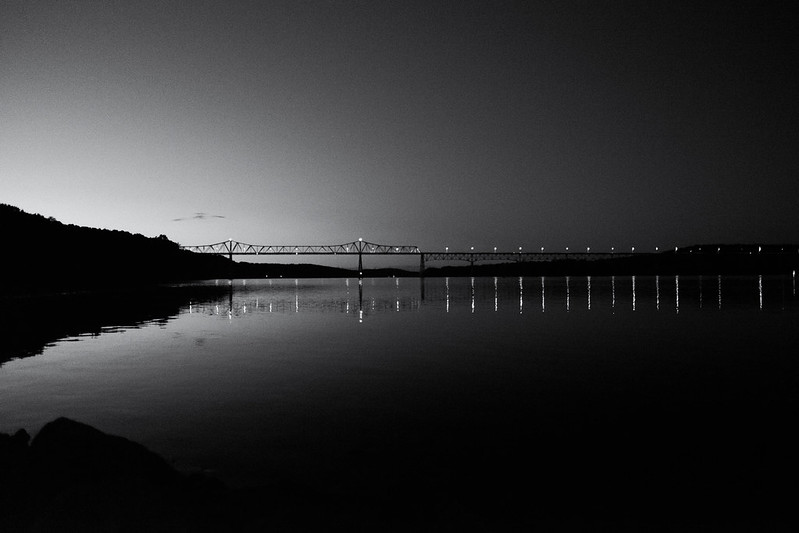 I’ve used it to great success for both prime focus astrophotography and wide-field with Fujifilm’s fantastic lenses.

However, I’ve had two recurring problems after using the camera in the desert heat and summer humidity: the bowed connection cover door, and expanding and peeling rubber skin/grip on the body. Both of these have been mentioned and discussed on various forums around the Internet, so I won’t dwell on them here. What I do find missing is the process of replacing the grip, and I hope others might find this helpful.

I decided to try to replace the rubber grip on my own. I ordered the parts from Fujifilm North America’s parts department. Interestingly, the new pieces I received this time seem to be made of much different material, which I hope will make them less susceptible to the problem repeating itself. More on that in a moment. There are four grip pieces on the camera, and each piece and tape (they are separate) costs rough $20 each.

To start with, the existing grip has to be peeled off, and all the tape residue on the camera body removed. Because the grip was already peeling, this part was fairly easy, and happily the tape, by and large, came off with the rubber. All it took was simply placing a fingernail under a corner and pulling. 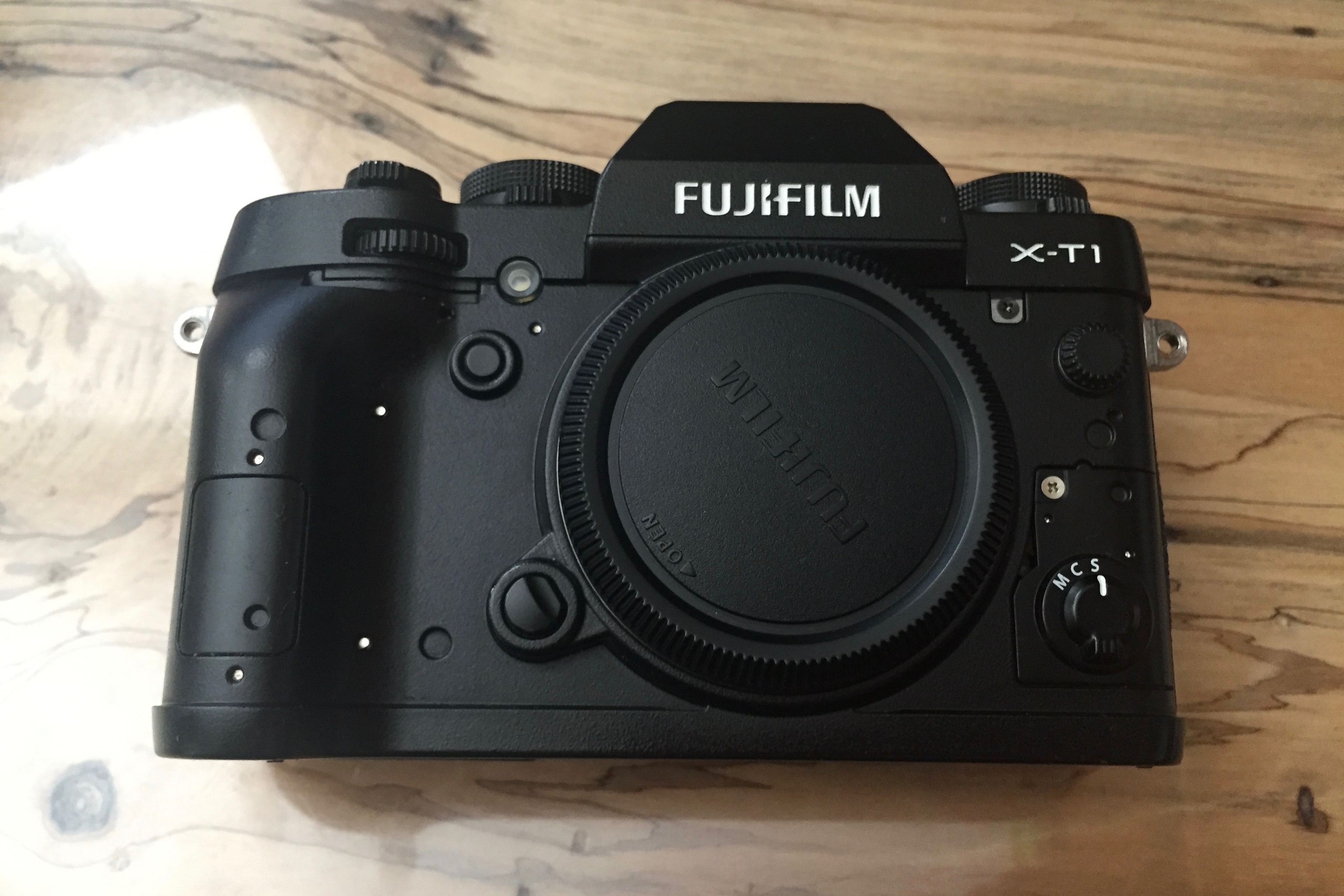 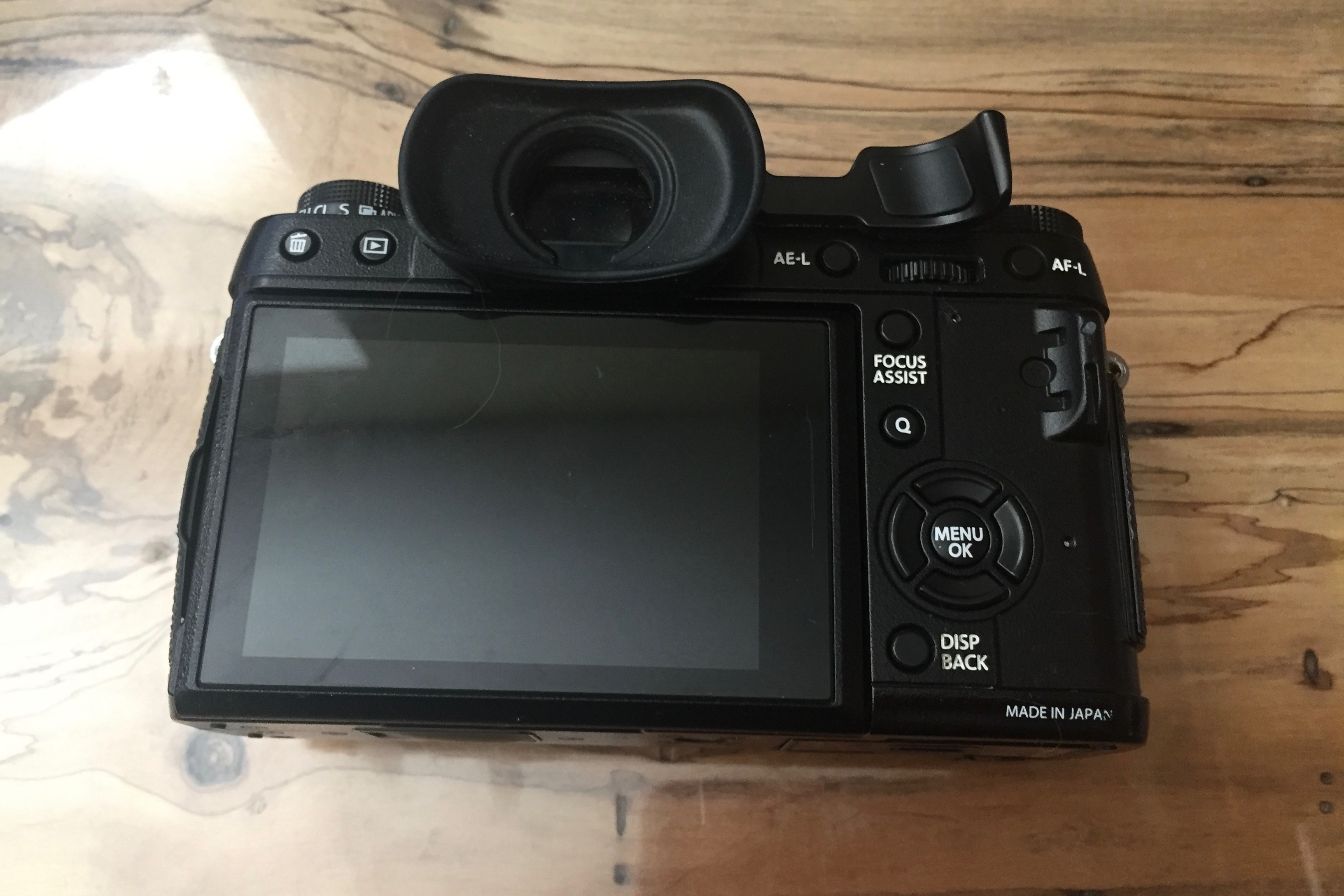 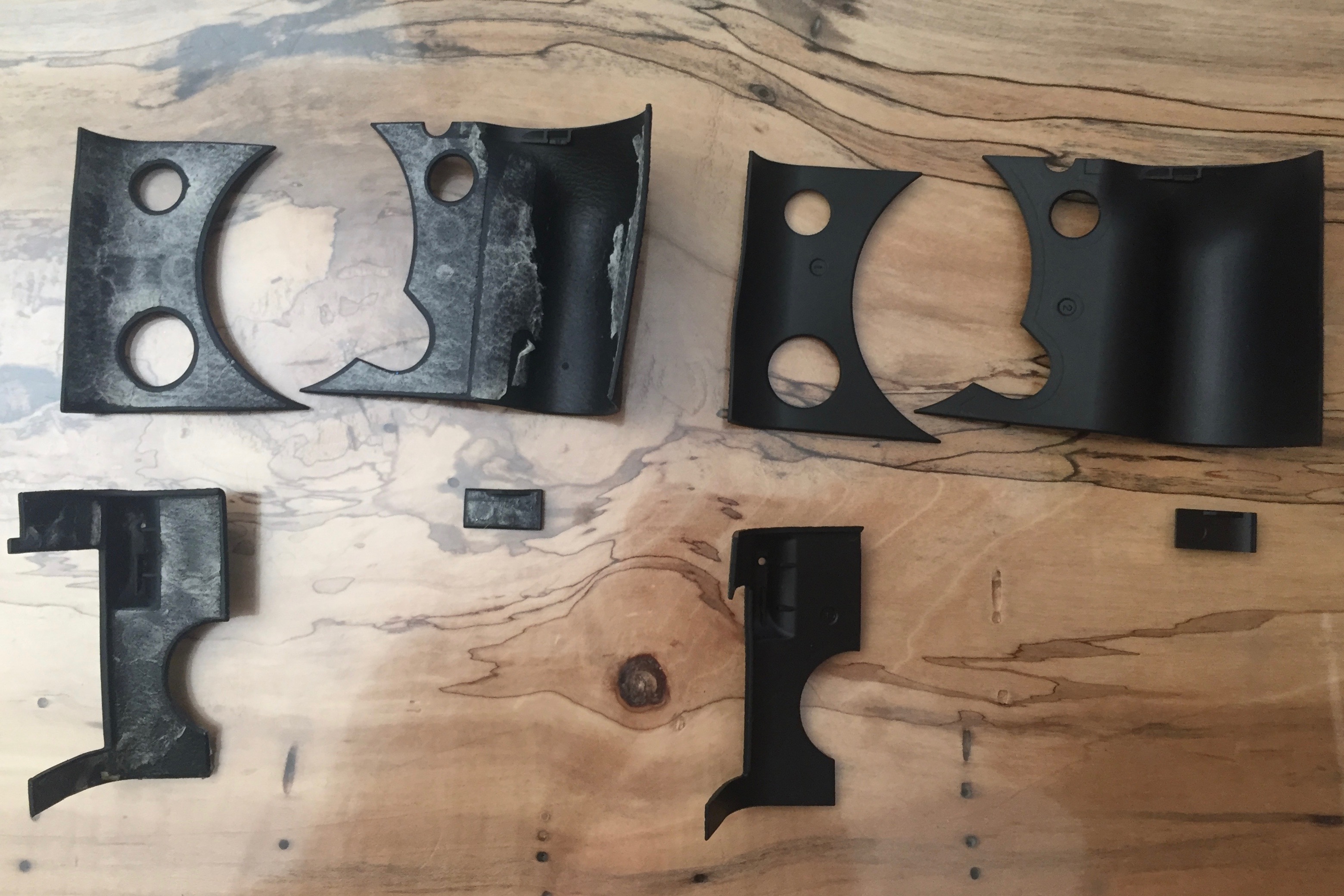 Once removed, I noticed something interesting about the old rubber grips versus the new ones. Not only are the new grips made of a different material, but the back of the grips where they adhere to the tape are textured on the old ones, but smooth on the new ones. I suspect that the texturing is one part of the problem with the old grips, and I’m happy to see that fixed. 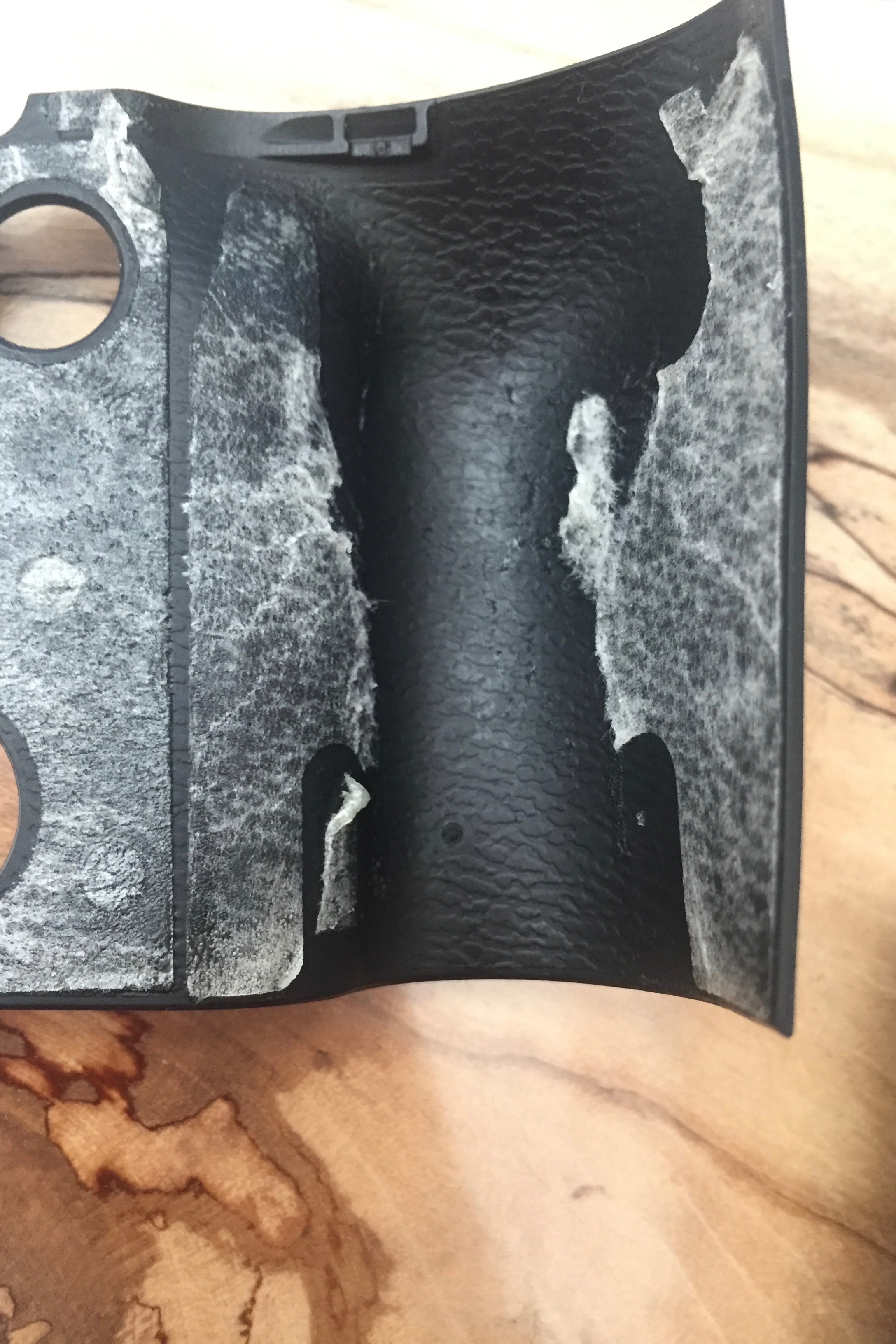 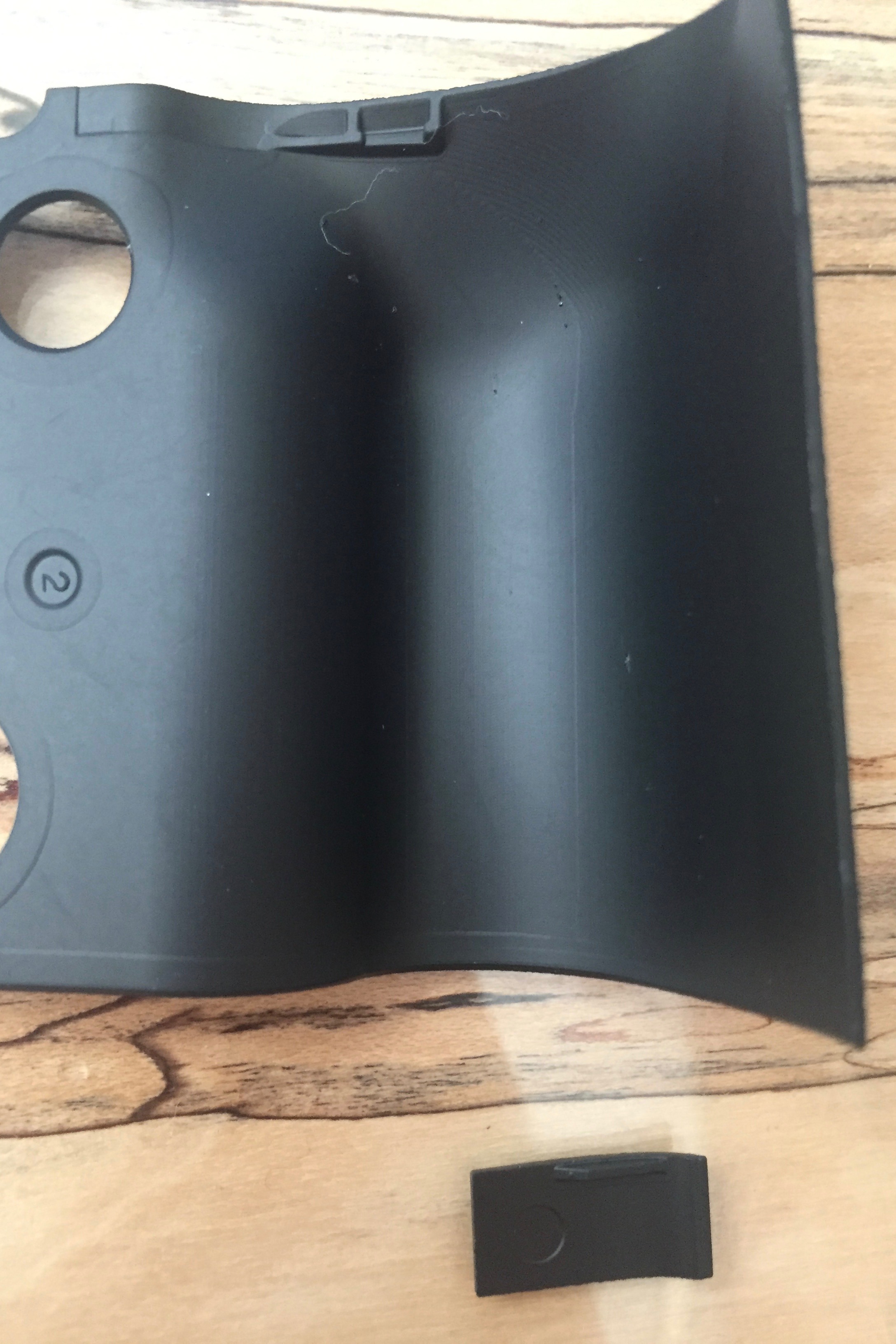 I cleaned up residual adhesive from the camera body with isopropyl alcohol and cotton, and made sure the surface where the new adhesive tape would go was as clean as possible. It was now time to figure out how to adhere the new grips to the camera body.

Fujifilm didn’t provide any instructions, and I haven’t seen anything online specific to Fujifilm’s grips and/or the X-T1. So, here goes:

The tape is provided separate from the grips. One one side, it has a large piece of plastic, and on the other side the plastic is cut to the same size as the tape, with a slight overhang. Looking at the shape of the tape, the camera body, and the adhesive left on the old grips, it was obvious that the tape is intended to peel from the large squares of plastic and adhere to the body, then the fitted layer of plastic is removed, and then the grip as adhered. 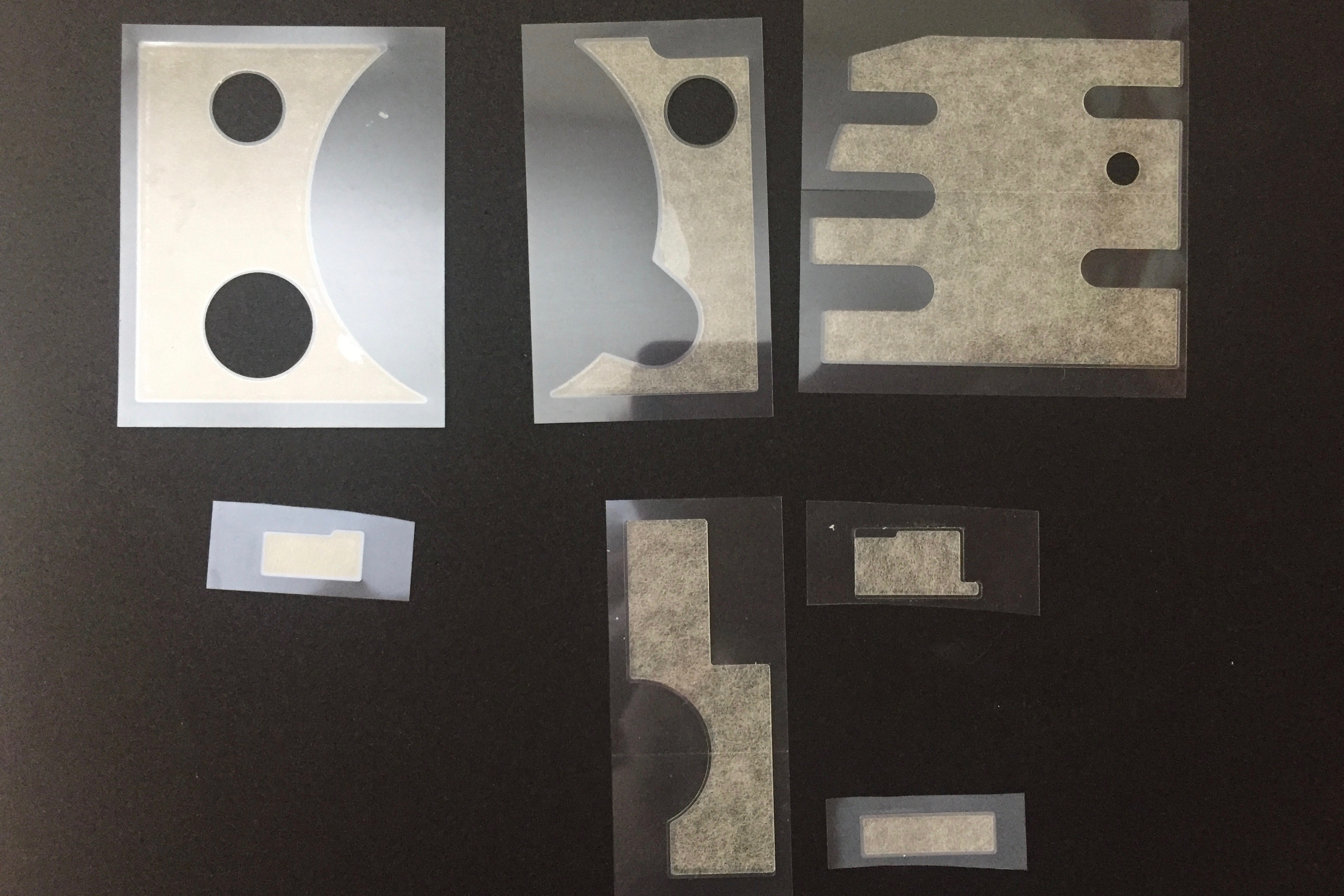 I started with the smallest piece, and what I assumed would be the easiest piece, the rectangle above the connection cover door on the left side of the camera. 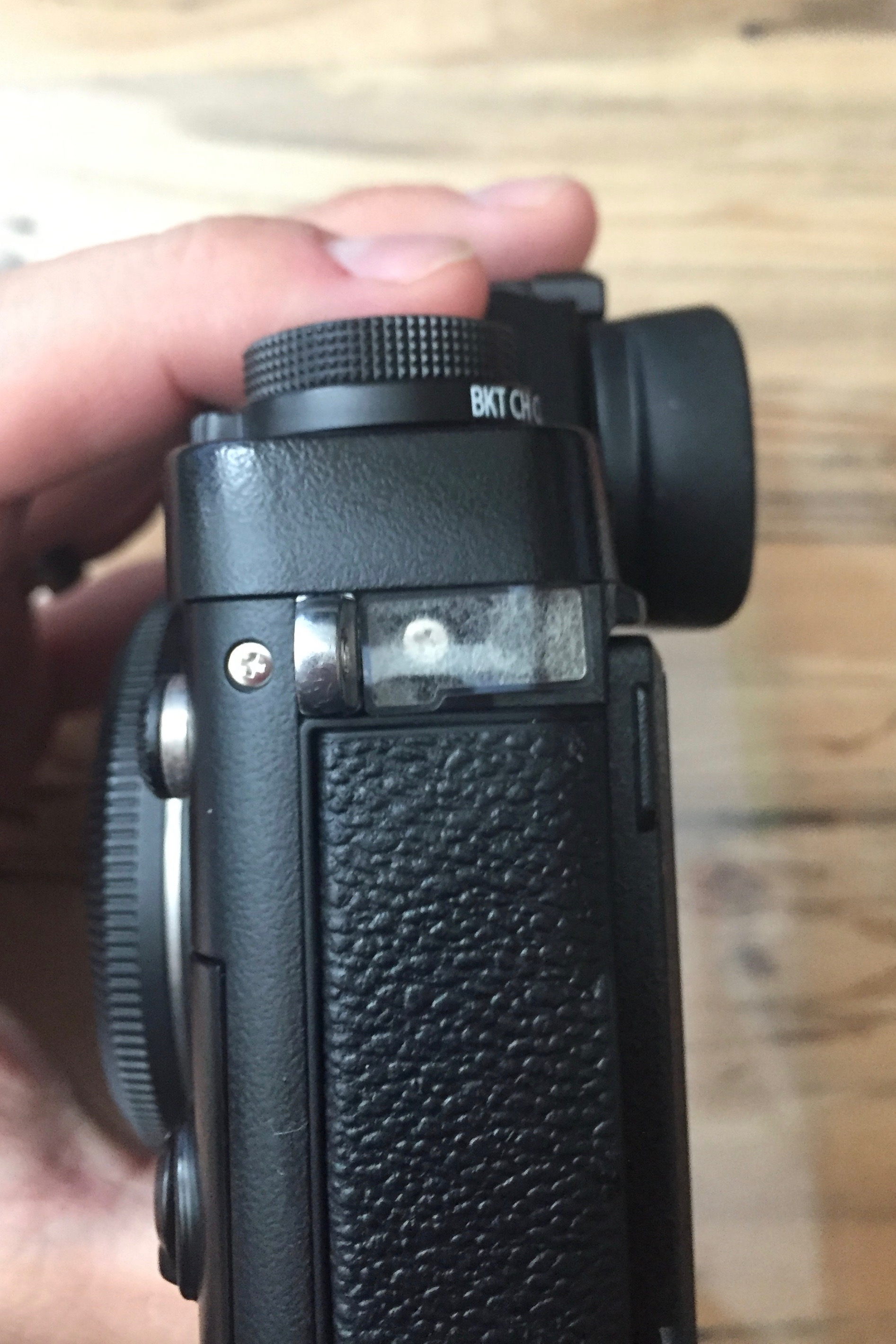 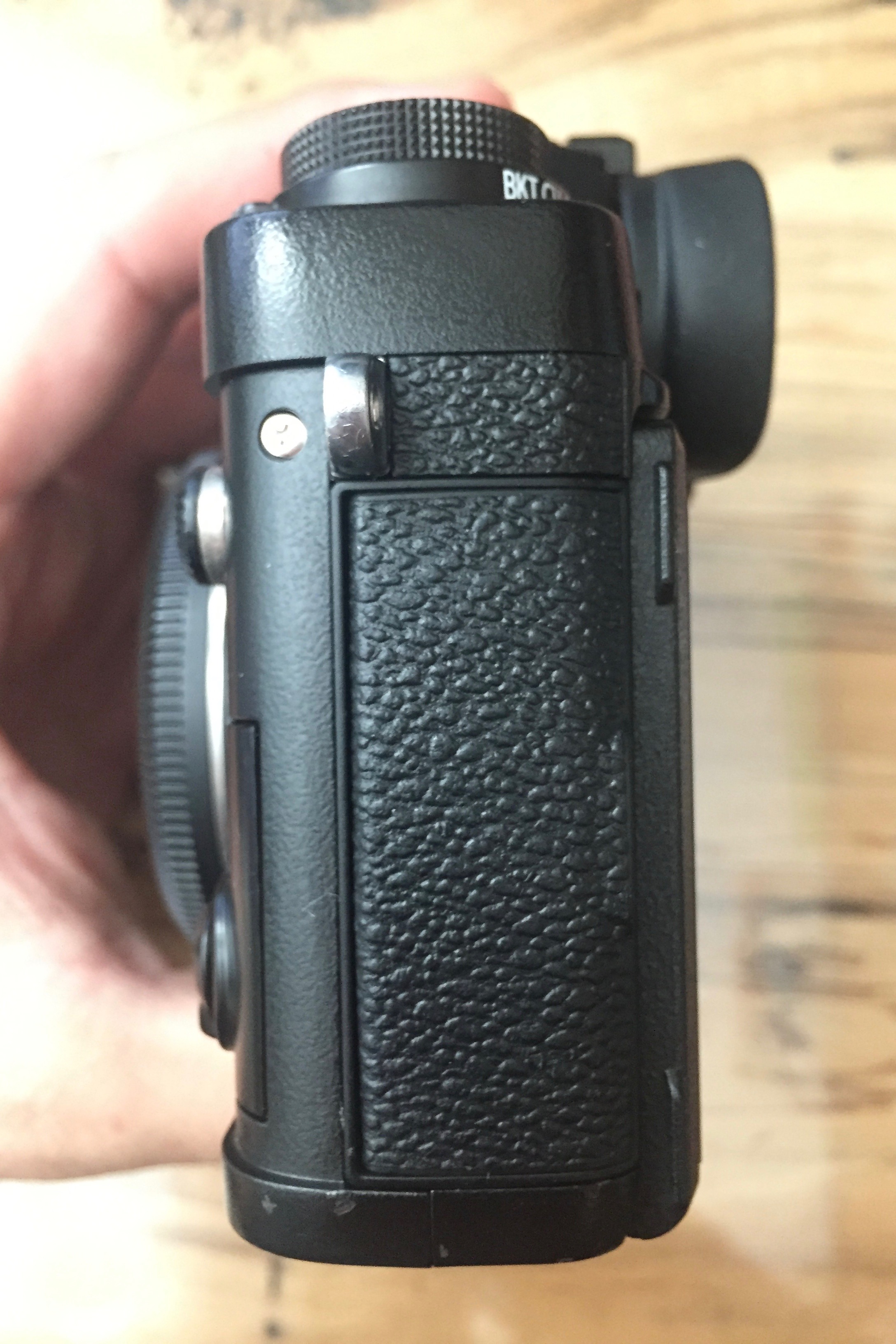 This piece was easy enough. I moved around the camera from there, doing the piece around the focus mode selector and PC sync port, and then moving on the right hand grip on the front. 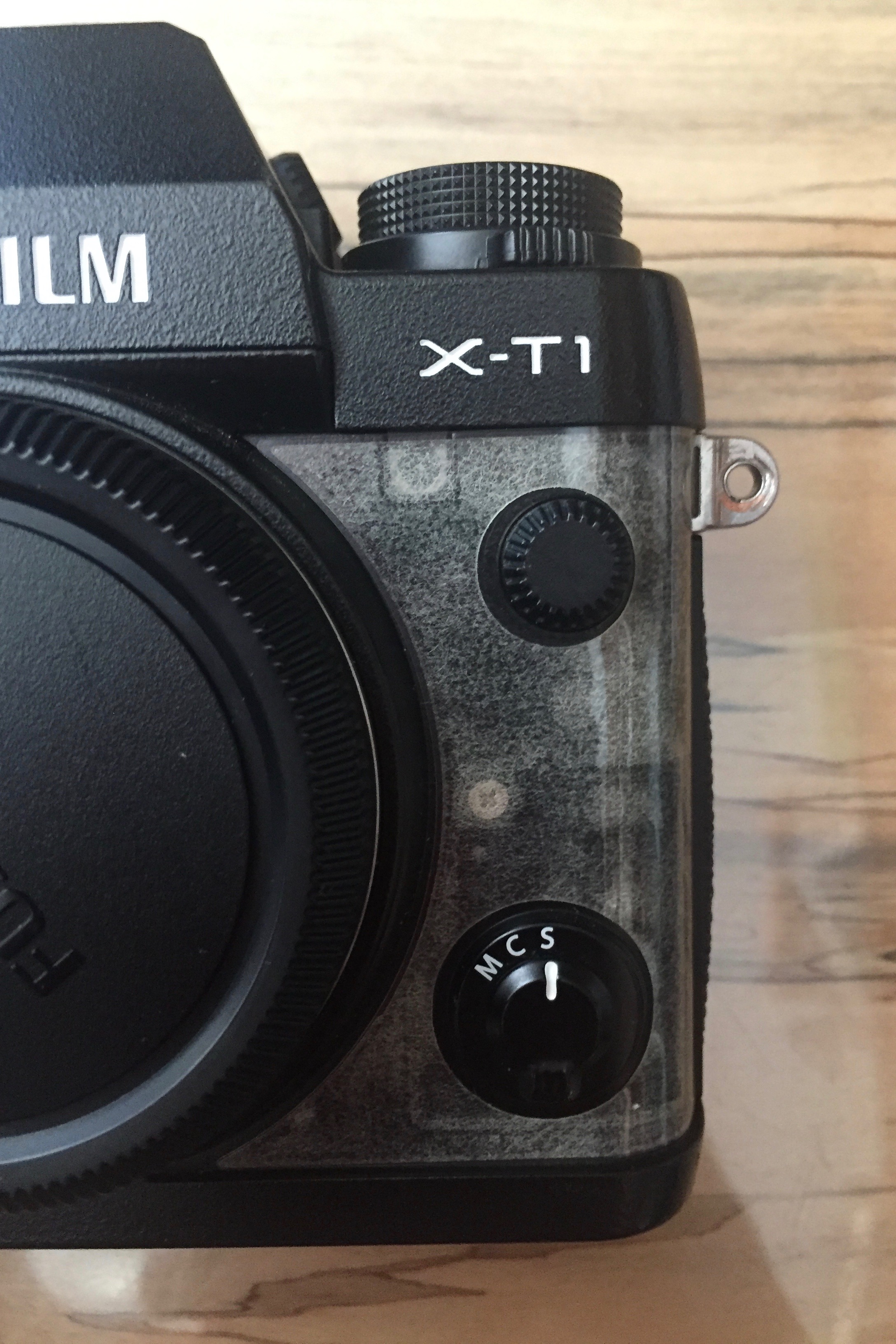 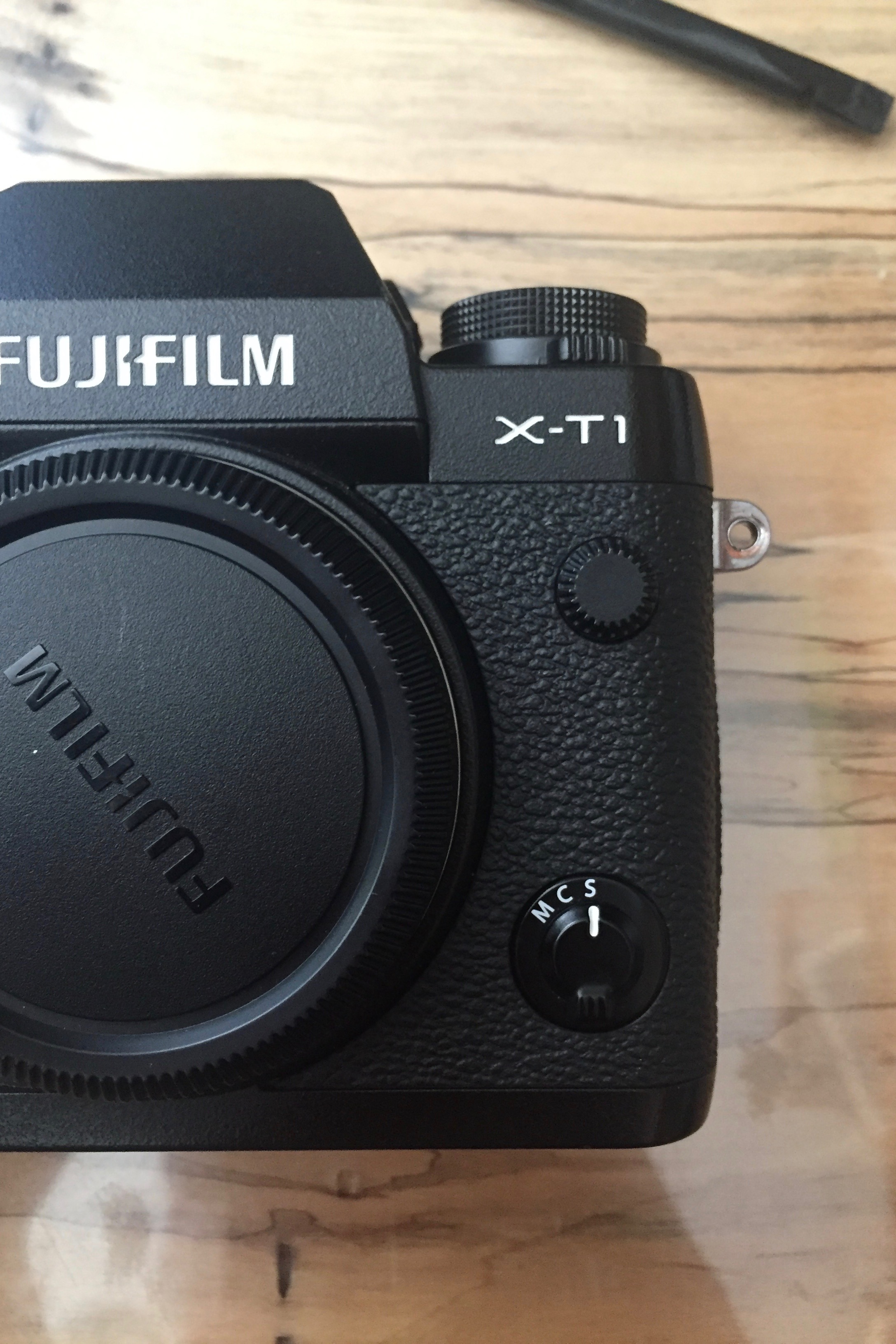 The right hand grip on the front actually came with two separate pieces of tape and the second, that wraps around the hand grip, has the potential for causing problems. 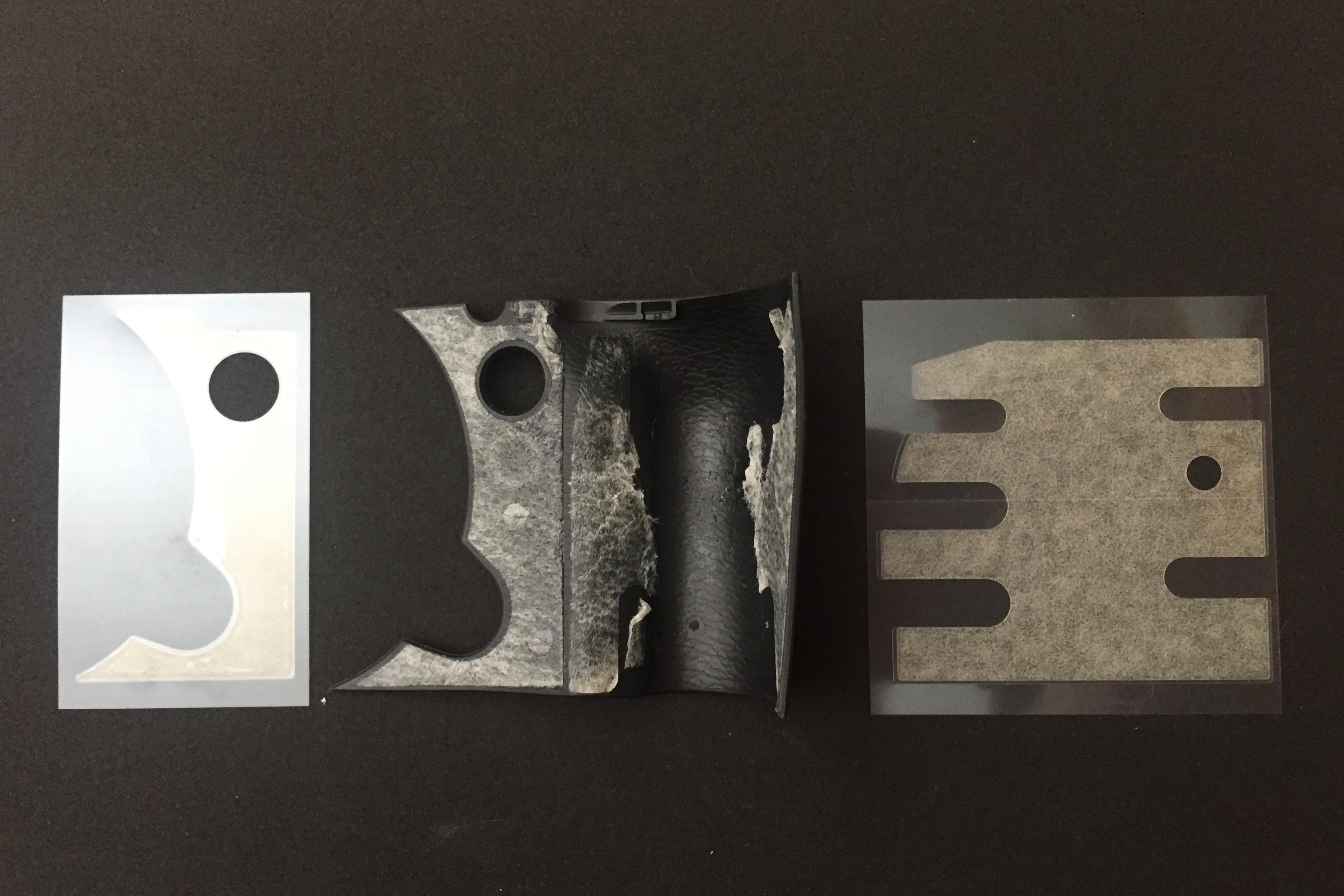 In the photo above, I attempted to illustrate how the tape should be applied to the camera relative to the grip. The photo is wrong. The larger piece of tape should be flipped horizontally and rotated 90º clockwise from what you see here, more like the photo below. 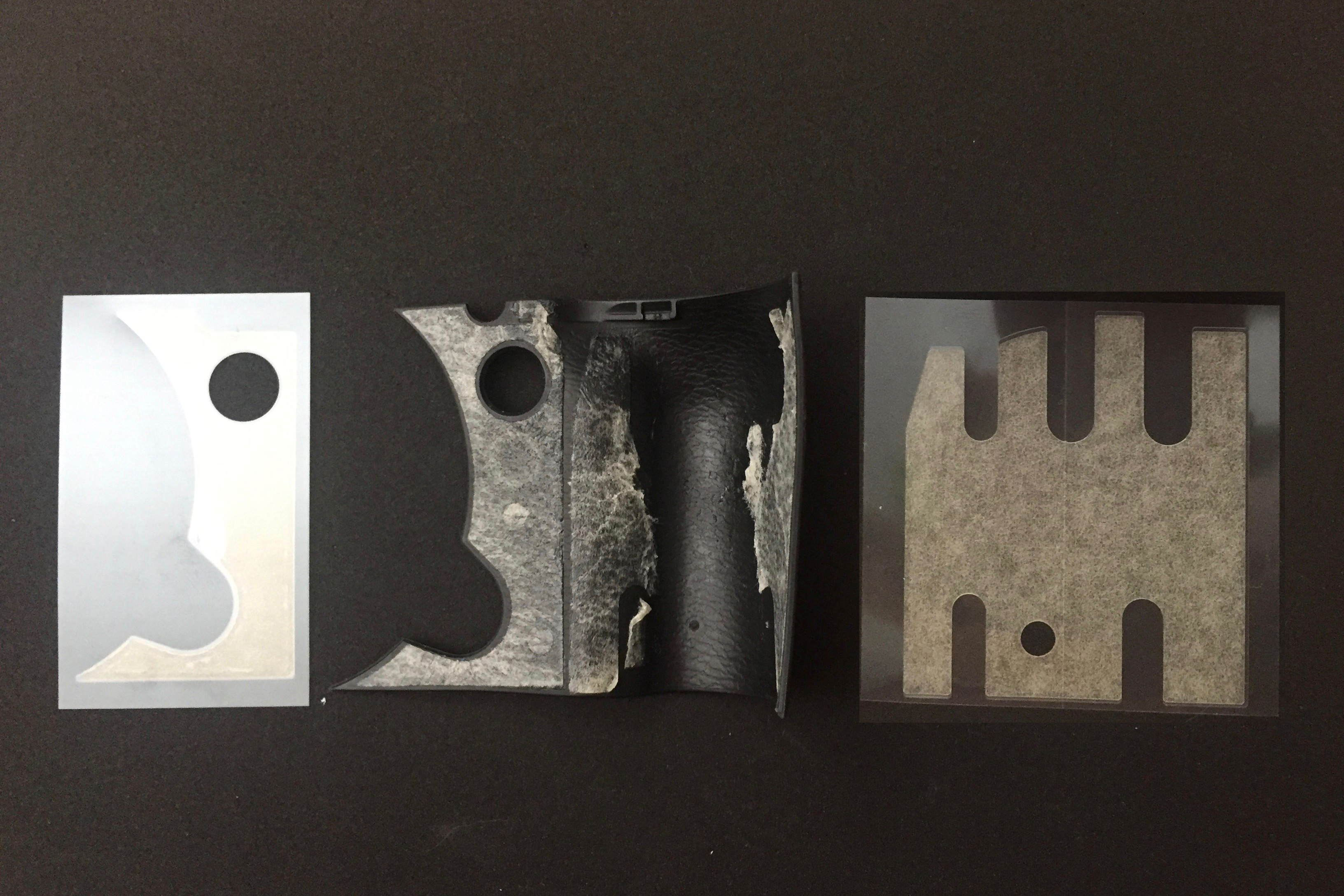 I didn’t take an in-between photo of this one because I actually screwed it up the first time and had to carefully peel it back off. Which leads me to my biggest piece of advice in this process.

When placing the tape on the body, do not press down until you’ve it positioned correctly. It will peel off again if it’s not quite right, as long as you don’t press it down. 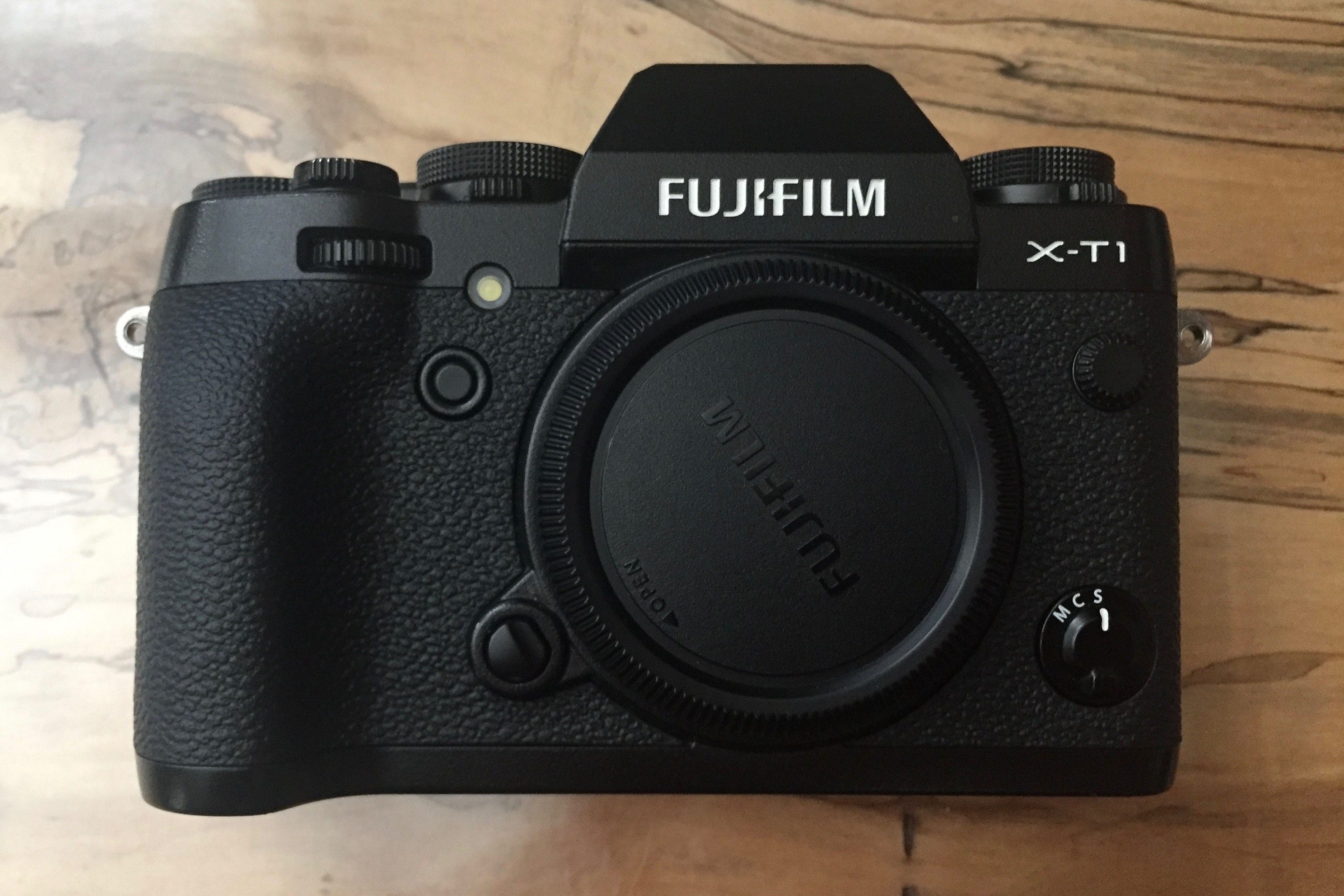 After a bit of a stressful moment then with the right front grip, the rear (where I had initially noticed the peeling) was simple enough as well. 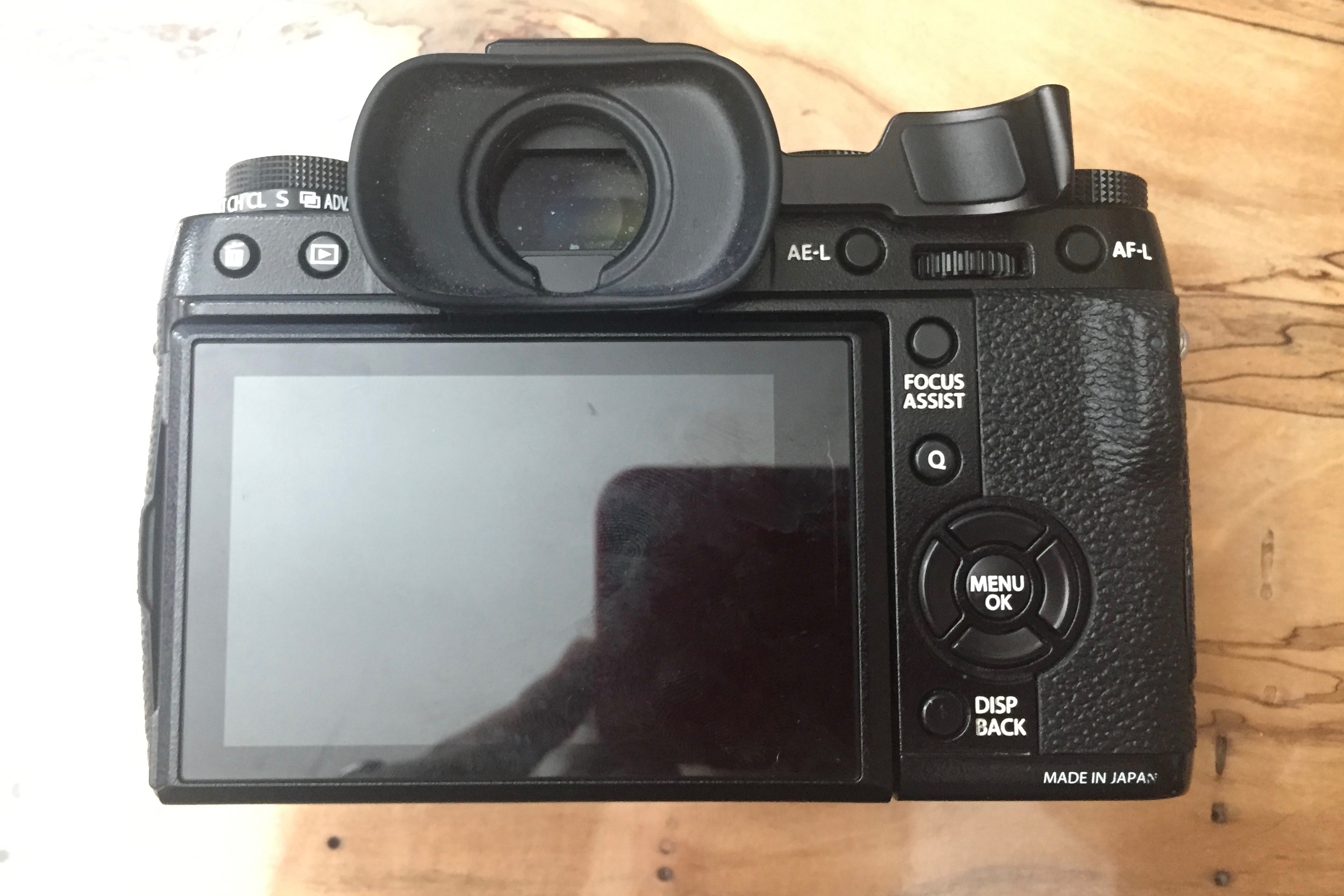 And that’s basically it!

Overall I am exceptionally happy that I did this, and I’m happy to see that Fujifilm has attempted to address the core problem with the grip by changing materials. The new material is significantly less “grippy” than the rubber that my X-T1 shipped with (it feels more like the plastic of the connection cover door on the left side). However I feel more confident that it will remain in place for much longer. The grip looks good and feels good. I do hope this helps anyone else who has the rubber grip expanding and peeling issue with their X-T1 and wants to replace the grip.

One word of warning: never, ever, under any circumstance attempt to stick the old grip back on with adhesive you couldn’t remove if you had to. As you can see from some of my photos, there are screws under the grip that you may need to be able to get to at some point in the future. Replacing it is not hard.